Who Are the Snowbirds?

Legend has it that the term Snowbird was first used to describe Canadians who often fled the brutal cold weather characteristic of our neighbors to the north. Decades ago when Florida land was cheap, Canadians often purchased inexpensive land and built modest winter homes so they could spend up to six months in the Sunshine State but still retain their homeland residency.
Today, the word Snowbird is mostly used to describe mostly Baby Boomer retirees who hail from northern and Midwestern states –and of course – Canada. Many Snowbirds rent vacation homes or condos, tow expensive RVs or buy into retirement communities. They often arrive in October before the first snowflakes fall returning home in late spring in time for winter’s thaw.
Of course, not all of our winter visitors hail from areas that see heavy snow and cold temperatures. Many visitors are retired and actually reside in areas such as Tennessee, Atlanta, Birmingham and Baton Rouge. These southern “Snowbirds” enjoy the camaraderie of good friends, fun activities and beautiful stretches of white-sand Gulf Coast as much as our friends from the north.
Hard numbers on the number of Snowbirds who stay along the Gulf Coast each year is impossible to find. We estimate 100,000 or more winter along the northern Gulf Coast and up to 10 times that number along the southern Florida Gulf Coast.
Those numbers can be multiplied many times when you consider that longer term Snowbirds often play host to family and friends throughout the season for shorter winter vacations.
Whatever the case, with the huge Baby Boomer generation just hitting retirement age, the influx of retirees is expected to continue to increase over the next 10 to 20 years. 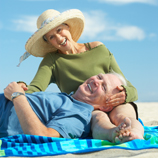